How Language Shapes Our Perception of the World

“As many languages you know, as many times you are a human being” – Tomáš Garrigue Masaryk

The importance of languages and the communication in different languages has increased drastically in the XXI century, due to globalization and companies starting to operate in different markets worldwide. Nowadays, we are able to communicate effectively with people from other countries by using English or even other languages. But sometimes we meet difficulties to properly understand each other, simply because of different meanings in our native language. So, how does language shape the way we see the world?

The linguistic area got revolutionized by Edward Sapir and Benjamin Lee Whorf with the introduction of the theory of linguistic relativism. Based on a comparative study of the American Indian language from the tribe Hopi and Indo-European languages, many differences between them were noticed. For instance, Whorf concluded that Europeans recognize the world as a “set of things”, while in Hopi language the world is a “collection of actions”. More so, categories such as “time” and “space” are not transcultural, but are part of our grammar. Thus, according to the Sapir-Whorf-theory, language is more than just a communication tool – it determines our perception of reality and influences our behavior. 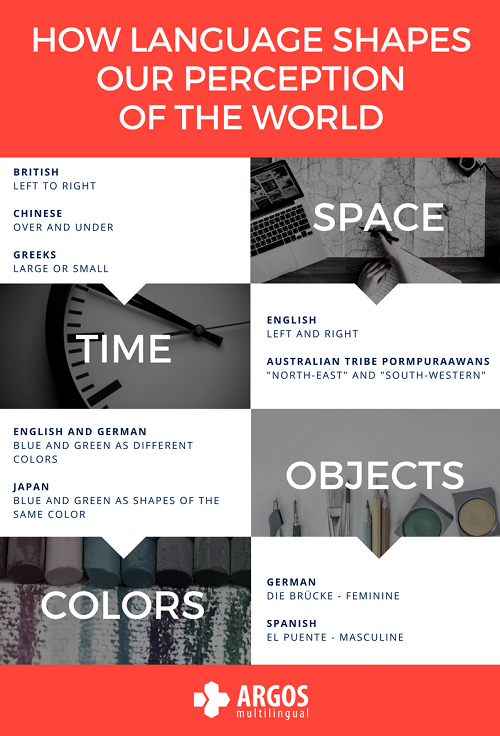 TIME
It may seem that the idea of “time” for all is the same but it turns out that it’s not that simple. Research carried out in the 70s proved that people who spoke a distinct language also perceived time differently: for the British “time” is linearly, moving from “left” to “right”. Chinese people have the idea of time in terms of “over” and “under”. In the case of the Greeks, size plays a significant role and time can be “large” or “small”.
Furthermore, Keith Chen – expert of behavioral economics – made an interesting discovery. He states that depending on what language we use, we have a different approach to financial and economic issues. Languages like English, Spanish or Portuguese indicate a specific time and distinguish between past, present and future in their grammar, while languages without time, like the Chinese, use the same phrases to describe the actions at different times. Chen argues, people who speak in “timeless languages” are more likely to save more. That is simple, when we talk about the future, we are thinking about something further and with more distant, so we are less motivated to save money now.

SPACE
Evidence of the language impact on human thinking is the language of space. In English, we have the expressions of “left” and “right” to describe the orientation of the world around us. However, in some languages, geographical directions are used. During a research expedition to Australia, Professor Lera Boroditsky hit upon the tribe Pormpuraawans. Their language does not refer to objects as right or left, but more as the “north-east” and “south-western”. Boroditsky noticed, that these people, thanks to that kind of language training, have a high sense of orientation and instinctively know where to go without getting lost even in a totally unfamiliar place.

COLORS
The distinction of color is also not so obvious. In English and German, blue and green are two different colors, but in Japanese language, these colors are considered as shades of the same color. In 1954, researchers Lenberg and Brown carried out an experiment on American, German and Japanese students and asked them to distinguish between different colors. It turned out that the Japanese often made mistakes when differentiating between the color of blue and green, while the Germans and the Americans succeeded flawlessly. The test showed that the results strongly depends on whether these colors have the same or different names in each language.

OBJECTS
Another example are “articles”. Languages such as French, German, Spanish, and Russian not only assign masculinity or femininity to subjects but also a whole range of inanimate objects. In the recent years, various experiments have shown that grammar articles can shape the different feelings and associations to the specific object in different languages. In a study, German and Spanish speakers were asked to describe how they see different objects, like a bridge or a key. German speakers associated a bridge with typical “feminine” adjectives like “pretty, elegant, peaceful, slender”. In contrast to that, the majority of the Spanish speakers used typical “male” adjectives to describe a bridge like “tall, long, powerful”. The reason for these different results might be the opposite grammatical gender the word has in both languages: The German word “die Brücke” is grammatically feminine and the Spanish word “el puente” is masculine.

Vocabulary and grammar in different languages tend to shape our perception of the world and way of thinking. That is why translations into other languages are very difficult. This all shows how important it is to get help from professional translators in the field of language and when translating your content to a global audience.

Argos Multilingual – our mission is to provide high-quality innovative language solutions to our customers while being the most respected business partner in the localization industry. We provide a full range of Language Translation Services that cover all our clients’ needs. Contact Us Today and find out how we can help you with your next translation project!